Too Many Emperors was

I'm happy to announce that as of October 11, 2020 my fantasy novel is out. Gold Tower, Red Tower.

This is Book I of the Roman Emperor series. It covers the years 62 to 65 A.D., which is the middle of Nero's reign. The rise of Senator Vespasian in Nero's court. Here is a review:

First Citizen Emperor is a rare treat in the field. The research is exhaustive, but artfully hidden within a rich storyline, believable characters, and a fast-moving plot.    Set in the year 62 AD, the novel follows the rise of Emperor Nero from boyhood, to the historic Fires of Rome, to the plot to overthrow him. Rome is displayed in full color; the decadence that the time period is known for is laid out, at times graphically so, but in a way that is not sensationalized. We also see Rome through the eyes of Vespasian as he alternately loses and then regains power through his stint in Africa, as well as through the various military campaigns in Armenia and beyond. Everything is captured: the varying attitudes and laxity of the slaves, the descriptions of the food, the murky intrigue of the Senate, and the horrific fire that destroyed much of the city where this Nero sang as it blazed.    A simple map is included (but only of Rome; a larger one more inclusive of the region would have been useful) as is a glossary (use of Latin is more frequent than would be expected but is greatly appreciated). What would have helped, though, would have been a more exhaustive list of characters than appears on the back cover.    A powerful book and a “must have” for public libraries. Some scenes put this out of reach for pre-high school libraries, however. Highly recommended—the second book is anticipated! -- Steve Shaw

Please select a link below to order off Amazon.com or Barnesandnoble.com: 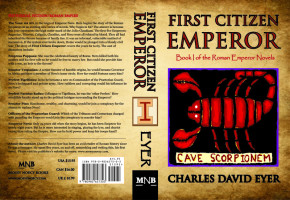